Science versus emotion was the guiding principle invoked by several delegates presenting their views on foie gras production July 16 to the House of Delegates.

In this case, evidence was to be found not in a research setting but on the farm.

Foie gras is a delicacy made from the livers of ducks and geese. The term is French for “fatty liver.” Birds are force-fed mostly corn to create lipidosis, which expands their livers to several times their normal size.

Two resolutions were before the HOD opposing the practice of force-feeding ducks and geese to produce foie gras. One of them was a compromise version that had garnered some bilateral support from the AVMA leadership and animal rights advocates. It became obvious as delegates began their discourse, however, that a groundswell of support was building to refrain from adopting an AVMA opposition statement.

Deliberations in the HOD centered not around which resolution was preferable, but whether to adopt a position on the practice at all. Two lines of reasoning ensued—determining what science says about the health and welfare effects of this practice, and whether it is advisable for the AVMA to take positions on specific production practices.

Limited peer-reviewed, scientific information is available dealing with the animal welfare concerns associated with foie gras production, but the observations and practical experience shared by HOD members indicate a minimum of adverse effects on the birds involved. Therefore, delegates decided it is not necessary for the AVMA to take a position on foie gras production at this time.

The issue emerged in the 2004 HOD, which referred a resolution opposing this practice to the Animal Welfare Committee for study. Subsequently, the AWC reviewed the scientific and ethical aspects of the practice and, in response, developed a different recommendation for Executive Board consideration.

This past April, the Executive Board forwarded the AWC’s recommendation to the HOD as a resolution—Resolution 3—so that delegates could decide the issue that originated in their chamber. It states: “Resolved, that the AVMA opposes the practice of mechanical force feeding of ducks and geese to produce foie gras because of the adverse effects on the birds’ health and welfare associated with this practice.”

The board recommended that the 2005 HOD approve Resolution 3 and disapprove the 2004 resolution—this year’s Resolution 1—which states: “Resolved, that the American Veterinary Medical Association hereby opposes the practice of force feeding ducks and geese to produce foie gras.”

One of the key differences between the two resolutions was inclusion of the word mechanical in Resolution 3. By including it, the submitters sought to eliminate the animal’s stress in having a tube forced down its esophagus but did not rule out the feeding of a high-energy ration.

Some of the makers of Resolution 1 wanted to withdraw it in favor of Resolution 3, but parliamentary procedure would not allow that, since it was submitted by petition and had been referred to the AWC.

Prohibiting production of foie gras in the United States would have a minimal impact on agricultural markets, but several delegates expressed concern that efforts to oppose foie gras production were just “baby steps” by groups with much more ambitious goals. Many of the 13 delegates who spoke to the resolutions were food supply veterinarians who foresaw adoption of a position statement opposing foie gras production as having the potential for a domino effect on other agricultural practices.

The delegation from New York, where two of the country’s three foie gras farms are located, took a strong stand against the resolutions. The HOD deliberations began with New York alternate delegate, Dr. Walter K. McCarthy, saying that the New York VMS board unanimously voted to direct their delegate to cast a vote against them.

Dr. McCarthy said that if the New York Veterinary Medical Society were to oppose foie gras production, its veterinarians would fully expect opposition to methods used to produce veal calves and other livestock to follow. Referring to the positions proposed by the resolutions, he said that opponents of production agriculture could easily propose modifications to those positions that would make them applicable to other stock. 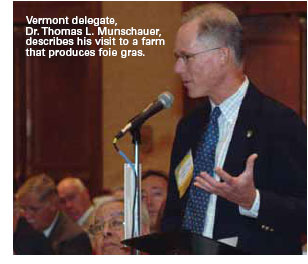 “We cannot condemn an accepted agricultural practice on … emotion,” Dr. McCarthy said. He presented what he considered facts about foie gras production to correct what he said are misperceptions. In contrast with what some critics claim, he said that the esophagus of the birds used for foie gras is lined with a cornified epithelium, “a very tough esophagus that can accept a great deal of abuse.”

He said it is very elastic and pliable, so the birds can swallow a huge amount of fish or grain. The birds don’t appear to be anxious around the persons feeding them, he said, and mortality is much less than at most agricultural facilities.

“The people who have actually seen these facilities are the ones you should listen to,” he added.

Dr. Gordon did so because, he said, the AVMA “is claiming” to be a science-based organization. “We’ve all seen the pictures. Seeing with your own eyes and penetrating the issue is worth a thousand pictures.”

On July 5, he visited a farm in New York. “After being on the premises, my position changed dramatically,” Dr. Gordon said. “I did not see animals I would consider distressed, and I didn’t see pain and suffering.” He said it is more distressing to take a rectal temperature in a cat. He cautioned against anthropomorphism, which is different from the human-animal bond.

Instead of the term force-feeding, Dr. Gordon advocated tube feeding, a term he noted is used in veterinary medicine. Dr. Susan L. Clubb, alternate delegate for the Association of Avian Veterinarians, said that some owners feed psittacines via tube. Their esophagus easily accepts a tube without stress, she said, and it would seem logical that the same would be true in birds used to produce foie gras. AAAV delegate Dr. James M. Harris agreed with Dr. Gordon that the use of “emotionally laden terms” is inappropriate. “We are a science-based, factual-based professional organization. … Whatever decision we make today has implications for agriculture.” He appealed to his colleagues not to “give the squeaky wheel the grease.”

Dr. Munschauer visited a New York farm at the request of “both sides” and was conflicted by what he saw. “I didn’t see exploding esophaguses … and it didn’t seem like the birds were distressed,” he said. He judged the facility to be better than most places where broilers are raised. The birds were obese toward the end of the three weeks but still able to walk. They didn’t swim or preen, and they were dirty but not more than other birds. “For the most part, they appear to be well-cared-for,” he said. “That’s what I saw.

“Now, let me say what I think—it is not a good use of these animals,” Dr. Munschauer said. Even if they are treated in a reasonable way from a factory-farming standpoint, he said, the production of foie gras induces disease. Veterinarians may condone the induction of disease in animals for research to learn how tumors are formed, for example, because that benefits society. Inducing disease to produce a food delicacy does not benefit society, he said.

Delegates had differing views, however, on whether a disease process is induced. Dr. McCarthy, for example, insisted that the practice isn’t part of a pathologic process, and Dr. Harris said it is a physiologic not a pathologic process. Nebraska delegate, Dr. Theodore Evans Jr., pointed out that feeding enriched diets in cattle is an existing practice that also induces diseases such as laminitis, acidosis, and fatty liver.

Dr. Y.M. Saif, delegate from the American Association of Avian Pathologists, contacted a scientist who is a foie gras expert in France, where he said 85 percent of the livers are produced, and was assured that mortality is down and the feeding personnel are highly trained.

A prevailing sentiment was that “this is an issue above and beyond the (two) resolutions,” as Dr. Gordon said. A recurrent comment was the need for the AVMA to develop broader policies on animal welfare. North Dakota delegate Dr. Charles L. Stoltenow said, “The AVMA must be a champion for discovery of the facts and keep (actions) on a national level.”

Similarly, from the AAAP, alternate delegate Dr. Greg J. Cutler said, “We need to be looking at animal welfare from a broad policy position … that can then be applied to all animal operations.”

As dialogue drew to a close, a few delegates posed questions of a more pragmatic nature. Dr. Cutler wondered whether blocking production of a product such as foie would result in a Prohibition-type situation. Travis D. McDermott, Student AVMA delegate, asked whether it might be more appropriate for the AVMA to have a position about oversight of the production process than to condemn it. Alabama delegate, Dr. William E. DeWitt, asked delegates, “Do we want (foie gras) produced in our country, where we have control and guidelines, or (to be) importing it?”

A Tale of Two Surveys